The History of Al-Tabari Volume 5: The Sasanids, the Byzantines, the Lakmids, and Yemen 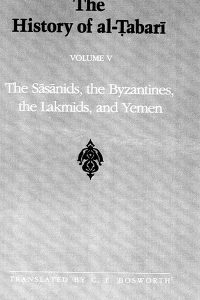 The History of Al-Tabari Volume 3

The Sasanids, the Byzantines, the Lakmids, and Yemen

This volume of al-Tabari’s History has a particularly wide sweep and interest. It provides the most complete and detailed historical source for the Persian empire of the Sasanids, whose four centuries of rule were one of the most glorious periods in Persia’s long history.

It also gives information on the pre-Islamic Arabs of the Mesopotamian desert fringes and eastern Arabia (in al-Hira and the Ghassanid kingdom), and on the quite separate civilization of South Arabia, the Yemen, otherwise known mainly by inscriptions.

It furnishes details of the centuries’-long warfare of the two great empires of Western Asia, the Sasanids and the Byzantine Greeks, a titanic struggle which paved the way for the for the subsequent rise of the new faith of Islam. The volume is thus of great value for scholars, from Byzantinists to Semitists and Iranists. It provides the first English translation of this key section of al-Tabari’s work, one for which non-Arabists have hitherto relied on a partial German translation meritorious forms time but now 120 years old.