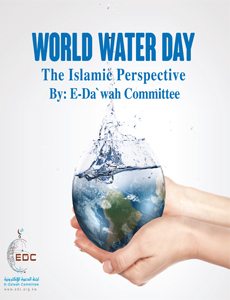 As water has become a matter of concern for the modern world and its international
organizations, such as the UN- officially designating a yearly World Water
Day observed on 22 March, Islam was the first to place such importance on the
matter.

Being the most important element of nature, and therefore the very basis for all
life on Earth, water in Islam in terms of importance and necessity is as old and
deep-rooted as the religion itself. Islam is a comprehensive way of life based on
the guidance of God. That’s why it came for the good of humanity – for man’s
well-being and welfare in this life and in the hereafter, calling for every good and
prohibiting every evil.

As a comprehensive way of life, Islam cares for environment and calls for protecting all
its elements that keeps life’s balance. The following are some aspects of Islam’s
concern for water as a critical element in protecting life.

1- The Importance and Necessity of Water

There are tens of verses that talk about the importance and necessity of water as
life-giving, and how important it is to protect and reserve this source of life on earth:
Have not those who disbelieve known that the heavens and the earth
were of one piece, then We parted them, and we made every living
thing of water? Will they not then believe? (Al-Anbiyaa’ 21:30)
Allah has created every animal of water. Of them is (a kind) that goes
upon its belly and (a kind) that goes upon two legs and (a kind) that
goes upon four. Allah creates what He will. (An-Nur 24:45)
It is He Who has created man from water: then He has established relationships
of lineage and marriage. (Al-Furqan 25:54)