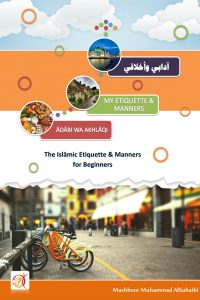 The Islamic Etiquette & Manners for Beginners

All praises are due to Allah  we praise Him, seek his help and forgiveness; and may Allah’s peace and blessing be upon His Prophet Muhammad.
Abu Hurairah reported:
The Prophet  said: “Indeed, I was sent to perfect and complete good manners”. (Al-Bukharī in his book Aladab Almufrad, declared sound by Al-Albani)
Islam has given good manners great care; and made the consequence of lacking it as a reason for deserving Allāh’s severe atonement. When looking into the Qur’ān and the authentic Sunnah (Prophetic tradition) we see a great manifestation -to an optimum- of these noble manners in the behavior and character of the Prophet Muhammad . Allah  praised him abundantly in the noble Qur’an; Allah  said: “indeed, you are up on great manners”. And his wife Aisha said: “His manners were the Qur’ān”. (Al-Bukharī in Aladab Almufrad, declared sound by Al-Albani )
Good manners have high significance in Islām. That’s why manners come in the highest rank after the belief and obligatory acts of worship. Islam substantially advocates to good manners.

Aishah  reported:
I heard the Messenger of Allah saying: “A believer will attain by his good manners the rank of one who observes fasting during the day and stands in prayer during the night.” (Abu Dawood, declared sound by Al-Albani)

Good manners are to be maintained with the parents, wife, husband, children, kin, neighbors, everyone and even animals and non-living things. The prophet  mentioned the story of a man who helped a dog and due to his mercy to that animal, Allāh  rewarded him greatly.

Abu Hurairah  reported:
Messenger of Allāh  said: “While a man was walking on his way he became extremely thirsty. He found a well, he went down into it to drink water. Upon leaving it, he saw a dog which was gasping out of thirst. His tongue was lolling out and he was eating moist earth from extreme thirst. The man thought to himself: ‘This dog is extremely thirsty like I was.’ So he descended into the well, filled up his leather sock with water, and holding it in his teeth, climbed up and quenched the thirst of the dog. Allāh appreciated his action and forgave his sins.” The Companions asked: “Shall we be rewarded for showing kindness to the animals also?” He said: “A reward is given in connection with every living creature”. (Al-Bukhāri and Muslim)