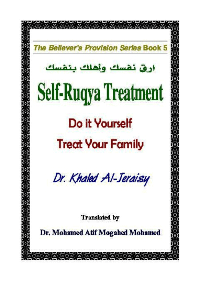 Praise be to Allah, the Kind the Ever Caring , the Able, the Merciful, the Owner of the dominion. It is who answers the prayers of those in urgent need, who heals His slaves whom He tries with illness.

Praise is due to Him for His great blessings and generosity.

We testify that there is no God but Allah, alone without partners, and we testify that Muhammad is His slave and messenger, whom He has sent as a mercy to all mankind.

May Allah’s peace and blessings be upon Prophet Muhammad, his kin, his sahaabah (companions) and he dedicated followers.

Regrettably, some Muslims have neglected ruqyas. Others may have never thought about them at all. They may even see them as nonsense (2). However, the faithful believe that ruqyas are a worthy means of immense benefit for healing all physical and non-physical illnesses. Shari’ah statements confirm the permissibility of seeking healing by Qur’anic recitations and the Prophet’s established prayers. For example, Allah says, “…Say: It [the Qur’an) is for those who believe [in it] guidance and a healing.” [41/44] Also, according to the Hadith, “When Allah’s Messenger became ill, Gibreel (Angel Gabriel) would do (this) ruqya unto him: In the name of Allah, may He grant you healing. May He cure you of all illnesses, of the evil of whoever envies you, and of evil eyes.