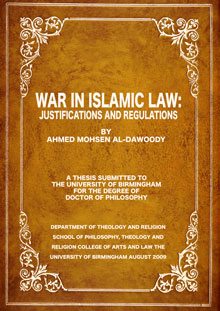 This study examines the justifications and regulations for going to war in both international and domestic armed conflicts under Islamic law. It studies the various kinds of use of force by both state and non-state actors in order to determine the nature of the Islamic law of war, specifically, whether Islamic law sanctions “holy war”, offensive war or only defensive war. It discusses international armed conflicts, i.e., war against non-Muslims, in the first four chapters: Chapters One, Two and Three treat the justifications for war in the Sīrah (biographies of the Prophet) literature, Tafsīr (exegesis) literature, and classical and modern juridical literature respectively. Chapter Four treats the Islamic regulations for war in international armed conflicts. Chapter Five is devoted to the justifications and regulations for the use of force in internal armed conflicts. It investigates the permissibility under Islamic law of resorting to the use of force to overthrow the governing regime and discusses the Islamic treatment of terrorism and the punishment of terrorists and their accomplices. It also discusses the claim that contemporary acts of domestic and international terrorism perpetrated by Muslims are motivated and justified by jihād. This study is limited to the four Sunni schools of Islamic law and also refers in some cases to the extinct Zāhirī school. It studies the writings of classical and modern Muslim jurists and scholars and compares them with the Western literature on the subject.

This study finds that jihād, in the sense of international armed struggle, as the term is currently used, is a defensive war justified in cases of aggression on the Muslim nation and fitnah, i.e., the persecution of Muslims. It also finds that the core justification in Islamic law for the use of force in domestic armed conflicts, and which may give an indication to future conflicts in the Muslim world, is the violations of the rules of the sharī‛ah. The study concludes that the Islamic law of
war as maintained by the majority of mainstream Muslims scholars has great potential for contributing to international peace and security in the modern world, particularly with regard to the humanization of armed conflicts and the peaceful resolution of internal conflicts.