The Messenger of Islam Muhammad 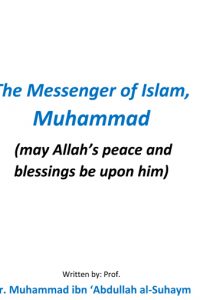 The Messenger of Islam Muhammad

(may Allah’s peace and blessings be upon him)

It explores his name, lineage, home country, marriages, and mission. It also covers the signs of his prophethood, his Shariah, and his enemies’ stance towards him.
The Messenger of Islam is Muhammad ibn ‘Abdullah ibn ‘Abd al-Muttalib ibn Hāshim. His line of ancestors extends back to Ismā‘il (Ishmael), son of Ibrāhim (Abraham) (peace be upon them).Prophet Abraham (peace be upon him) traveled from the Levant to Makkah in the company of his wife, Hājar, and his son, Ishmael when he was a baby. By Almighty Allah’s command, he settled them in Makkah. Years later after the boy had grown into a young man, Abraham (peace be upon him) returned to Makkah and began building the Ka‘bah (i.e. the Sacred House) with the help of his son Ishmael (peace be upon him). It attracted throngs of people who traveled to Makkah, the destination of Allah’s worshippers, seeking to perform Hajj. Centuries passed and people worshiped Allah in accordance with Abraham’s religion.Unfortunately, deviation ensued across the Arabian Peninsula, leaving it no less idolatrous than its surrounding territories. The worship of idols, burial of baby girls alive, oppression of women, perjury, consumption of alcohol, perpetual immorality, devouring the wealth of orphans, and consumption of usury were all manifestations of idolatry.In such environment, the Messenger of Islam, Muhammad ibn ‘Abdullah, the descendant of Ismā‘il ibn Ibrāhim (peace be upon them) was born in 571 AD. His father died before his birth and his mother passed away when he was six. His uncle, Abu Tālib, looked after him. Muhammad was a poor orphan and he lived off his own manual labor.