My belief – Islamic creed for beginners 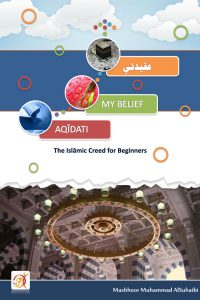 My belief – Islamic creed for beginners

All praises are due to Allāh, we praise Him seek His help and forgiveness and Allāh’s Apeace and blessing be upon His Prophet Muhammad.

Man was created in this life for a purpose and Allāh  had clearly guided him to that purpose. That’s why Messengers were sent through time to convey His noble message to mankind.

Allāh the Exalted said: (And I (Allāh) created not the jinn and mankind except that they should worship Me (Alone) ) (The Noble Qur’ān 51:56)
It is incumbent upon every human being to follow Allāh’s final revelation and to attain and apply the teachings preached by the seal of all Prophets Muhammad .  The way to achieve all that is knowledge. That’s why Allāh  abundantly praised those who go along this path and spare their time seeking it.

Allāh the Exalted said: (Allāh will exalt in degree those of you who believe, and those who have been granted knowledge. And Allāh is Well-Acquainted with what you do.) (The Noble Qur’ān 58:11)

Narrated by Abu Hurairah  that the Prophet  said: (Whoever traverses a path seeking knowledge, Allāh  shall ease, for him, through it a way to paradise) (Muslim)

Narrated by Mua’wiah ibn Abi Sufyan that the Prophet  said: (Whoever Allāh  wants good for, He grants him understanding of the deen (religion)) (Al-Bukhārī and Muslim)

The most noble of all knowledge is the Qur’ān; following its guidance; abiding to its teachings; mastering reading it; and reflecting upon its eloquently profound rhetoric and meaning.

Allāh the Exalted said: ((This is) a Book (the Qur’ān) which We have sent down to you, full of blessings that they may ponder over its Verses, and that men of understanding may remember.) (The Noble Qur’ān 38:29)

Narrated by Othman ibn Affān  that the Prophet  said: (The best amongst you are those who have learnt the Qur’ān and taught it.) (Al-Bukhārī)

After the noble Qur’ān comes the knowledge of the Sunnah (the teachings of Prophet Muhammad ); learning his biography and following him in belief, worship, manners and etiquette.

Allāh the Exalted said: (There has certainly been for you in the Messenger of Allāh an excellent example for anyone whose hope is in Allāh and the Last Day and [who] remembers Allāh often.) (The Noble Qur’ān 33:21)
Source: King Fahd National Library