The History of Al-Tabari Volume 2: Prophets and Patriarchs 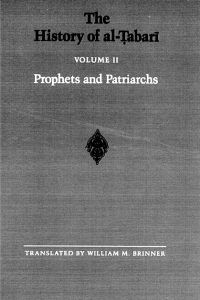 The History of Al-Tabari Volume 2

This volume records the lives and efforts of some of the prophets preceeding the birth of Mohammad. It devotes most of its message to two towering figures–Abraham, the Friend of God, and his great-grandson, Joseph.

The story is not, however simply a repetition of Biblical tales in a slightly altered form, for Tabari sees the ancient pre-Islamic Near East as an area in which the histories of three different peoples are acted out, occasionally meeting and intertwining.

Thus ancient Iran, Israel, and Arabia serve as the stages on which actors such as Biwarasb, the semi-legendary Iranian king, Noah and his progeny, and the otherwise unknown Arabian prophets Hud and Salih appear and act.

Before proceeding to the story of Joseph, which is recounted in great detail, we linger over the accounts of two figures associated with ancient Arabia in Muslim tradition: the Biblical Job, who despite his trials and sufferings does not rail against God, and Shu’ayb, usually associated with the Biblical Jethro, the priest of Midian and father-in-law of Moses.

Finally we meet Joseph, whose handsome appearance, paternal preference, and subsequent boasting to his brothers lead to his being cast into a pit and ending up as a slave in Egypt.

His career is traced in some detail: the attempted seduction by Potiphar’s wife, his imprisonment and eventual release after becoming able to interpret dreams, and his rise to power as ruler of Egypt.