Female Transmission of Hadith in the Mamluk Period: An annotated Edition and Study of Ibn Hajar’s Mu`jam Ash-Shaykhah Maryam 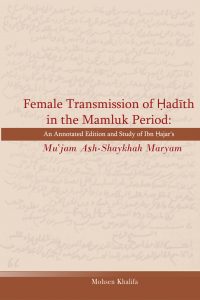 Female Transmission of Hadith in the Mamluk Period: An annotated Edition and Study of Ibn Hajar’s Mu`jam Ash-Shaykhah Maryam

This study focuses on the life of one individual Ḥadīth female transmitter, Ash-Shaykhah Maryam Al-Adhraʿiyyah (719/1319-805/1402), based on Ibn Ḥajar’s Muʿjam Ash-Shaykhah Maryam that he had compiled about her.At the end of the study, an annotated edition of the Muʿjam will be provided.

As the scope of women’s participation in Ḥadīth transmission is very large and has been covered in many other publications, I chose to focus on the life of one individual female Ḥadīth scholar and her role, both as a student of Ḥadīth and a transmitter thereof.

This will help in drawing a clearer picture of the general role of women as participants in transmitting the words of the Prophet.

By studying Ash-Shaykhah Maryam’s life and work, it is hoped that women will be recognized, as Sayeed suggested, as examples of a normal and important phenomenon in Islamic history, not as anomalies, and their role in both the scholarly environment and the broader context of Mamluk society will be more widely accepted.