Apostasy in Islam: A Historical and Scriptural Analysis 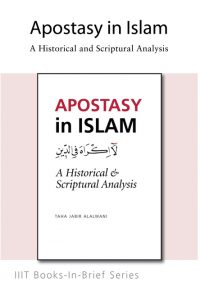 Apostasy in Islam: A Historical and Scriptural Analysis

What is the legally prescribed penalty, if any, for apostasy (al-riddah), and how does this relate to the demand for religious tolerance as stipulated in verse 2:256 of the Qur’an There shall be no compulsion in matters of faith ? It is an established fact that the Prophet never, in his entire life, put an apostate to death. Yet, the issue remains one of the most controversial to have afflicted the Muslim world down the centuries. It is also the source of much damaging media coverage today as Islamic jurisprudence stands accused of a flagrant disregard for human rights and freedom of expression.

The subject of this book is a highly sensitive and important one. The author rightly concentrates on evidence, to examine the historical origins of the debate in rigorous detail, as well as the many moral and contextual issues surrounding it. Disputing arguments put forward by proponents of the death penalty he contends that both the Qur’an and the Sunnah promote freedom of belief including the act of exiting the Faith and do not support capital punishment for the sin of al-riddah. Note that attention is on the word sin, for there is qualification: as long as one s apostasy has not been accompanied by anything else that would be deemed a criminal act, particularly in terms of national security, then according to the author, it remains a matter strictly between God and the individual. Of interest is the fact that the Qur’an significantly refers to individuals repeatedly returning to unbelief after having believed, but does not mention that they should be killed or punished. This work has been written at a time of great complexity and vulnerability when a true understanding of the higher intents and values of the Qur’an and the Sunnah, maqasid al-shariah, is sorely needed. The author employs a strong evidence-based approach examining in detail the Qur’an and authentic Hadith, taking into consideration traditional approaches to the study of the Islamic textual sciences and other fields of knowledge, as well as analyzing scholastic interpretation. Taking the life of a person without just cause is according to the Qur’an equivalent to the killing of the whole of mankind. It is vital therefore, that in the interests of compassion and justice, as well as freedom of belief, this subject is clearly addressed once and for all.

One thought on “Apostasy in Islam: A Historical and Scriptural Analysis”

The True Information about Apostasy in Islam!