Who wrote the Bible? 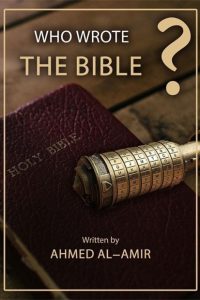 Who wrote the Bible?

This book refutes the Church’s claims about the four Gospels and their attribution to the disciples of Jesus, peace be upon him.

This book discusses several points, including:

1- A quick tour in the history of the New Testament.

2- Were the scribes of the four Gospels, disciples of Jesus Christ?

3- The names of the disciples of Christ are mentioned in the four Gospels, but there is neither Luke’s name nor Mark’s name among them. Who are they?

6- There is no co-called the original Gospel of the Four Gospels.

7- Were the four Gospels inspired by the Holy Spirit? The Church’s need to claim that!

8- The four Gospels recognized the existence of the Gospel according to the narration of Jesus Christ, peace be upon him (The Muslims Gospel).

9- Dozens of anonymous gospels appeared in the second century and were used in the struggle between the beliefs of the early church fathers.

10- Irenaeus was the one who named these four Gospels (according to the account of Matthew, Mark, Luke, and John).

11- Polycarp and Papias are imaginary figures of the imagination of Irenaeus that did not exist in reality.

12- The ten papyri from the second century cannot be evidence.

13- Dating the papyri through paleography is a deception.

14- The Church admits that there are forged additions in the New Testament.

15- The early church fathers were influenced by Greek philosophy, and they merged it into the Christian faith.

16- The author of the Gospel of John was quoting from the Greek philosophers and Philo, the Alexandrian Jewish philosopher.

17- Who wrote the Old Testament?

18- The mystery of Loss of the Torah (Old Testament).

19- The Church does not know who wrote the letter to the Hebrews, but it added it to the Bible because it liked it!

20- The disappearance and loss of many books of the Bible.