Translation of Religious Terminology: Al-Fat-h Al-Islami as a Model 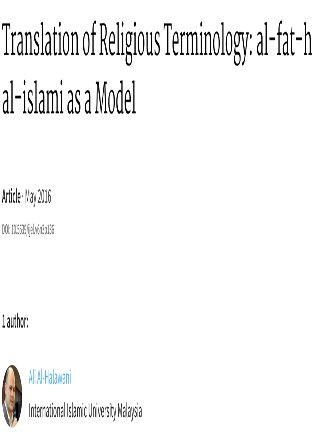 This paper is an attempt to illustrate the importance of understanding the religious and cultural background of the ST in the translation process in order to reach an accurate and precise translation product in the TL. The paper affirms that differences between cultures may cause complications which are even more serious for the translator than those arising from differences in language structures. The sample of the study is concerned with an Islamic term, namely al-fat-h al-Islami-commonly rendered into English as Islamic Conquest or Invasion-a religiously and culturally bound term/concept. The paper starts by defining culture, and then follows with an extensive lexical analysis of the selected term/concept. The study proves that it is difficult to translate this concept into the TL simply due to the lack of optimal or even near optimal cultural equivalents. The skill and the intervention of the translator are most crucial in this respect because, above all, translation is an act of communication. It is hoped that this study will provide a more precise equivalent of this significant concept; a matter which may better reflect the innate peaceful nature of Islam as a religion. The in-depth descriptive analytical method this study follows can be used to analyze other religiously and culturally bound terms/concepts.