Towards a Proper Evaluation of Al-Hafiz Arabic Collocations Dictionary 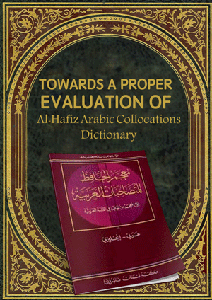 It has become known that the concept of Lexical Collocations is largely controversial. This can be attested to by the fact that until now it is difficult to even state an all-inclusive definition of the phenomenon, or come to a consensus on its different types and patterns. Beside other issues, the problems involving lexical collocations are paramount in a very specific field, namely the translation from Arabic into English and vice versa. The basic problem in the process of translation lies in attempting to find a word in one language that perfectly matches another in another language. This, however, presupposes that the two languages in question are perfectly typical in terms of categorization, social and cultural backgrounds, figuration and linguistic usage, imagination, conceptualization, and so on. Nevertheless, this is not and can never be attained, as deemed by Umar (1998: 251-256). The disagreement among linguists regarding the definition, types and patterns of collocations is the reason behind the scarcity of collocational dictionaries and their late appearance among the works of different language aids, regardless of the fact that a huge number of collocations can be found in general (i.e. non-collocational) lexicons and dictionaries (Al-Wadarni 2006:191). Added to this is the difficulty of compiling any collocational dictionary without adopting the recent methods of dictionary compilation, such as the availability of large corpora as well as adequate, updated text analysis software; something which is apparent from the fact that the first English collocational dictionary appeared in 1986,1 while the first Arabic one appeared in 2004.

As for the significance of collocational dictionaries for the translator, Emery (1987: 3-4) noted, “… neither the Arabic translator working into English nor the English translator working into Arabic is particularly well-served by the available monolingual or bilingual dictionaries in their search for collocational equivalence.” This is due to the fact that only consulting a traditional (i.e. non-collocational) dictionary, it is ‘near to impossible’ to locate the correct translation of such ‘pre-fabricated’ expressions.(2) Though existing phraseological dictionaries contain a bulk of lexical collocations, in no way are they sufficiently exhaustive or all-embracing.

As for the existence of collocations and the ways of handling them in modern Arabic dictionaries, it is noticeable that bilingual dictionaries of MSA, such as Wehr’s (1979, 1985), do not contain enough collocational information to support learners and translators as far as Arabic is concerned. According to Emery (1987), up-to-date monolingual dictionaries of Arabic simply do not exist. Here, a remark is needed to update such a statement, because recently the ALECSO Basic Dictionary appeared (Al-Kasimi et al. 1989). However, the amount of collocations it has is rather limited.(3)

1- In reference to The BBI Combinatory Dictionary of English.

2- This term is taken from Carter (1987: 59), where he stated, “language production consists of piecing together such ready-made ‘pre-fabricated’ units appropriate to a situation and that lexical acquisition may involve the learning of complete collocational chunks of language”.

3- The ALECSO Basic Dictionary is an addition to the few modern Arabic dictionaries specialized in linguistics. Moreover, its edge over the former ones is its official  character as it was issued by the ALECSO in 1989. It was prepared by the Arabization Coordination Bureau, i Rabat. It was undertaken under the supervision of a galaxy of able experts in Arabic from Egypt, Algeria, Sudan, Saudi Arabia, Morocco and Tunisia. We have not assessed The ALECSO.