Tough Conversations: Explaining the Islamic Prohibition of Same-Sex Acts to a Western Audience 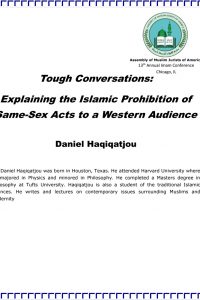 In the midst of these favorable attitudes, Muslim imams and religious leaders face an increasingly challenging environment in which to explain Islam’s stance on this topic. Expressing any negative attitude toward homosexuality is now seen as hate speech, and the purveyors of that speech are sanctioned, boycotted, and can even face criminal charges in certain countries. It should not be underestimated how such steep consequences and strict policing have influenced the religious conversation on homosexuality. Imams and religious leaders often have to censor themselves in order to avoid backlash and even prevent criminal prosecution. This directly impacts how these leaders can teach the moral principles of Islam as well as the specific rulings and guidelines related to same-sex acts and sexual behavior in general. If our leaders cannot properly and fully convey these lessons of great moral and spiritual importance, not only will the Muslim community suffer, but so will the larger society in which same-sex practices are increasingly practiced and accepted.