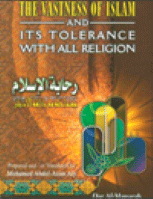 The Qur’an is a universal teaching which means the human being wherever he is and to whatever race he belongs. Constantly calling to reason, to the good sense and to the noble feelings.

The Qur’an aims at purifying habits, clarifying creeds, bringing them nearer, dropping down racial barriers and national chauvinism, and replacing the law of truth and justice instead of law of violence.

Although the Qur’anic doctrine took its flight in Arabia and has been diffused at first among the Arabs, but it is destined for the whole universe