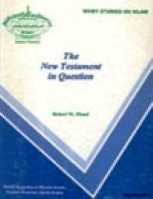 People have argued, have killed each other, have waged wars throughout the course of the last two thousand years over the way in which particular passages of the New Testament should be understood.

In the past, when Church Fathers or other individuals were confronted with one of the various biblical ambiguities and contradictions, they speculated about its meaning.

They attempted to interpret it. Once accepted, the conclusion of their speculation – that is, their interpretation – would become enshrined as dogma.

Over the centuries, it then came to be regarded as established fact.
Such conclusions are not fact at all.

On the contrary, they are speculation and interpretation made into a tradition; and it is this tradition which is constantly mistaken for fact.