The History of Al-Tabari Volume 8: The Victory of Islam 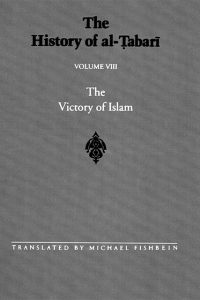 The History of Al-Tabari Volume 8

The Victory of Islam

Volume VIII of al-Tabari’s great 40-volume history of the Arabs covers the history of the Muslim community and the biography of Muh’ammad in the middle Medinan years. During this period, Meccan resistance to Islam collapsed, Muh’ammad returned triumphantly to his native city, and the Muslim community weathered controversy in Muhammad’s private life.

This volume covers the history of the Muslim community and the biography of Muhammad in the middle Medinan years. It begins with the unsuccessful last Meccan attack on Medina, known as the battle of the Trench.

Events following this battle show the gradual collapse of Meccan resistance to Islam. The next year, when Muhammad set out on pilgrimage to Mecca, the Meccans at first blocked the road, but eventually a ten-year truce was negotiated at al-Hudaybiyah, with Muhammad agreeing to postpone his pilgrimage until the following year.

The Treaty of al-Hudaybiyah was followed by a series of Muslim expeditions, climaxing in the important conquest of Khaybar. In the following year Muhammad made the so-called Pilgrimage of Fulfillment unopposed.

Al-Tabari’s account emphasizes Islam’s expanding geographical horizon during this period. Soon after the Treaty of al-Hudaybiyah, Muhammad is said to have sent letters to six foreign rulers inviting them to become Muslims. Another example of this expanding horizon was the unsuccessful expedition to Mu’tah in Jordan.
Shortly afterward the Treaty of al-Hudaybiyah broke down, and Muhammad marched on Mecca.

The Meccans capitulated, and Muhammad entered the city on his own terms. He treated the city leniently, and most of the Meccan oligarchy swore allegiance to him as Muslims.