The History of Al-Tabari Volume 7: The Foundation of the Community 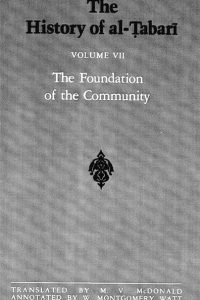 The History of Al-Tabari Volume 7

The History of al-Tabari :Tarikh al-Rusul wa’l muluk ‘Annals of the Apostles and Kings’ ,by Abu Ja’far Muhammad b Jarir al-Tabri (839-923).It is by common consent the most important universal history produced in the world of Islam.

The Foundation of the Community

The contents of this volume are extremely significant: The specific events in this earliest period set precedents for what later became established Islamic practice.

The book deals with the history of the Islamic community at Medina during the first four years of the Islamic period–a time of critical improtance for Islam, both as a religion and as a political community.

The main events recounted by Tabari are the battles between Muhammad’s supporters in Medina and their adversaries in Mecca.

Tabari also describes the rivalries and infighting among Muhammad’s early supporters, including their early relations with the Jewish community in Medina.