The History of Al-Tabari Volume 6: Muhammad at Mecca 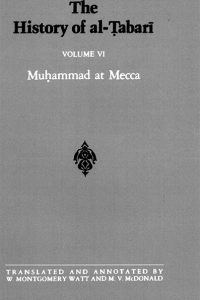 The History of Al-Tabari Volume 6

The sixth volume of the translation of al-Tabari’s History deals with the ancestors of Muhammad, with his own early life, and then with his prophetic mission up to the time of his Hijrah or emigration to Medina.

The topics covered mean that this volume is of great importance both for the career of Muhammad himself and for the early history of Islam.

Al-Tabari was familiar with, and made use of, the main early source of these matters, the Sirah or life of Muhammad by Ibn Ishaq, a work which is still extant.

Although his own treatment is briefer than that of Iban Ishaq, it complements the latter in important ways by making use of other sources.

Where Ibn Ishaq gave only the version of an event which he preferred, al-Tabari includes any variants which he considered of value.

Thus he mentions the dispute about the first male to become a muslim–‘Ali or Abu Bakr or Zayd–and has also several variant accounts of the call to hostility toward Muhammad from many of the leading Meccans and their attempts to put pressure on his family to stop his preaching.A concluding section discusses some chronological questions.

This volume does not merely give a straightforward account of the earlier career of Muhammad and the beginnings of Islam, but also contains valuable source-material not easily accessible otherwise, or not accessible at all.
Source: kalamullah