The History of al-Tabari Volume 10: The Conquest of Arabia 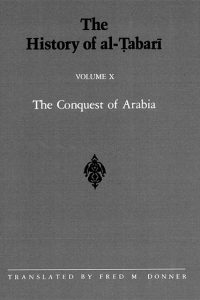 The History of al-Tabari Volume 10

The Conquest of Arabia

Volume X of al-Tabari’s massive chronicle is devoted to two main subjects. The first is the selection of Abu Bakr as the first caliph or successor to the Prophet Muh’ammad following the Prophet’s death in 632 C.E. This section of the History reveals some of the inner divisions that existed within the early Muslim community, and sheds light on the interests and motivations of various parties in the debates that led up to Abu Bakr’s acclamation as caliph.

The second main subject of Volume X is the riddah or “apostasy”–actually a series of rebellions against Muslim domination by various tribes in Arabia that wished to break their ties with Medina following the Prophet’s death.

The History offers one of the more extensive collections of accounts about this early sequence of events to be found in the Arabic historical literature.

It provides richly detailed information on the rebellions themselves and on the efforts made by Abu Bakr and his Muslim supporters to quell them. It also tells us much about relationships among the tribes of Arabia, local topography, military practice, and the key personnel, organization, and structure of the early Islamic state.

The successful suppression of the riddah marked the transformation of the Muslim state from a small faith community of importance only in West Arabia to a much more powerful political entity, embracing all of the Arabian peninsula and poised to unleash a wave of conquests that would shortly engulf the entire Near East and North Africa. The riddah era is, thus, crucial to understanding the eventual appearance of Islam as a major actor on the stage of world history.
Source: kalamullah