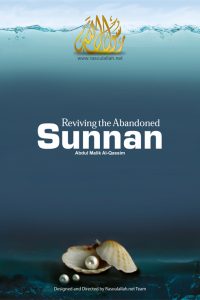 The Happiness of Servants is in the Guidance of the Best of Servants
Thanks to Al-lah for sending his messenger with guidance and the religion
of the truth, that he may make it topmost above all religion, despite the
hatred of associators (those who associate others with Al-lah). Peace and
blessings be upon the one who was sent down as a mercy for mankind, our
prophet Muhammad, his household and companions.

No happiness for mankind and no salvation for them except through
following the messenger as Al-lah states (what can be translated as):
“And whoever obeys Al-lah and his messenger, he will cause him to enter
gardens from beneath which rivers run, eternally (abiding) therein; and that
is the magnificent triumph. And whoever disobeys Al-lah and his messenger
and transgresses his bounds, he will cause him to enter a fire, eternally
(abiding) therein, and for him is a degrading torment.” (An-Nisa: 13-14) the
obedience of Al-lah and his messenger (peace be upon him) is the pole of
happiness that we revolve around and the abode of salvation that we seek.