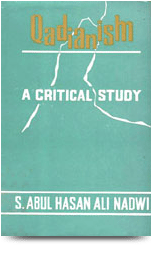 Towards the end of December, 1957, and in the beginning of January, 1958, an International Islamic Colloquium was held in Lahore under the auspices of the Punjab University in which a large number of distinguished and noted scholars of the Muslim world and Western countries took part. Quite a few outstanding Ulama representing Middle Eastern countries were there.
Despite having received an invitation to participate the writer was unable to reach Lahore until after the colloquium had ended. The points that had been raised during the colloquium continued to be debated by many people.