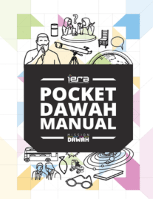 This booklet serves as a beginner’s toolkit to understanding the importance of dawah and also how to give dawah.

By the end of this booklet, you will have mastered a framework on how to convey the message of Islam effectively.

This framework is like a skeleton which requires you to do further advanced studies in order to add meat to it.

i want this book by arabic please .

mashallah
this website is great.
I would love to get some books from please.

Assalamu alaikum
Mashallah, this is the most wonderful websitei really like it
please can I get some books from you?

Walaikum assalam warrahmah, we only carry electronic book on this site in PDF format.

In The Name Of Allah Most Beneficent And Most Merciful

Inaugurated by His Excellency Dr. Sheikh Abdulrahman bin Abdulaziz Al-Sudais general president of the Grand Mosque and the Prophet’s Mosque on the draft Custodian of the Two Holy Mosques for interpretation of the Friday sermons site to be globally broadcast on the internet through the website (haramainlive.org).

The Director of Translation Management Prophet’s Mosque, Sheikh Abdullah bin Hattab Hattab that the site includes seven different languages and is designed to deliver simultaneous speeches translator to Muslims around the world elderberry and languages and spread the message of the Two Holy Mosques guidelines and awareness and guidance for pilgrims and visitors in their own language as well as the upgrading of the services provided in various fields.

At the end of the inauguration of His Excellency President-General praised the efforts of the Translation Management also thanked His Excellency the efforts of the governors commanded blessed and input from the solemn and concrete services of the Two Holy Mosques, God called that Adzehm richly rewarded and that provides them with the help of God Almighty and shot and makes the plate in the balance of their arable.