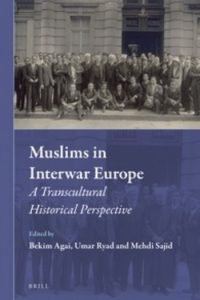 Some of these works deal with Muslims in interwar Europe as part of Middle Eastern and Asian history, colonial studies or briefly as related to European migration history.

Other historians deliver nationally focused narratives of the Muslim presence in western, central, and eastern European territories focused on specific countries, framed within a national history.

The present volume puts the trans-cultural perspective on Muslims in interwar Europe into focus. It is the outcome of an international symposium entitled “Islam in Interwar Europe and European Cultural History,” which was held at Leiden University (13–14 December 2012).

It was organized by the three editors of this volume in cooperation with the Leiden University Centre for the Study of Islam and Society (lucis) and the research group “Europe from the Outside” at the University of Bonn sponsored by the German Federal Ministry of Education and Research (bmbf).

A number of scholars from various disciplines were invited to discuss how individuals and groups labeled as “Muslims” interacted with their respective European societies during the interbellum period.

Some of the guiding questions were: What were their circumstances in their countries of residence? How did they interact as a minority group with the majority society? What impact did their connections to their counterparts in the Muslim world have on their presence and reflections in Europe? How did the attitude of their respective European societies influence their understandings of Islam and Europe? What kind of new challenges did their presence represent for the European societies? In dealing with questions of this kind the participants attempted to scrutinize some gray areas of European history and connect geographically restricted findings; this has the potential to give us a whole new perspective on the Muslim presence in interwar Europe.