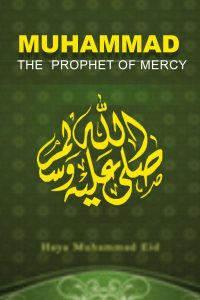 For mercy there was sent a Prophet. In him mercy talked, mercy walked, mercy lived on the
earth at one time.
That time began on Monday, the ninth of Rabi‘ I, in Makkah Al-Mukarramah [Makkah, the Honored]. This mercy was born of the noblest and purest lineage, from the best family among the Arabs, whose pedigree is traced back to Isma‘il (Ishmael), son of Ibrahim (Abraham), the father
of all the prophets (blessings of Allah be upon them).
Muhammad bin ‘Abdullah bin ‘Abdul-Mutalib bin Hashim bin ‘Abd-Manaf bin Qusai bin Kilab bin Murrah bin Ka‘b bin Luaiy bin Ghalib bin Fahr bin Malik bin An-Nadr bin Kinanah bin Khuzaimah bin Mudrikah bin Ilyas bin Mudar bin Nizar bin Ma‘d bin ‘Adnan, and ‘Adnan is from the children of Isma‘il, son of Ibrahim (peace and blessings of Allah be upon them both)

With Prophet Muhammad came the birth of the light that guides to the way of peace, mercy, and happiness. There has come to you from Allah a light and a plain Book wherewith Allah guides those who seek His Good Pleasure to the ways of peace, and He brings them out of darkness by His Will unto light, and guides them to a Straight Path.
It is not possible to gather all the rays of this light in hands for humanity to read; but this book will try to draw closer to this most nobly-mannered man, to his Message and mercy, begging help and support only from Allah.

Turning the pages of his noble, faith-filled, and faith building life, and hearing the depiction given by a close eyewitness, Ja‘far bin Abu Talib, to the Christian Emperor of Abyssinia (Ethiopia), nothing better can introduce the Prophet of Mercy and the greatest aspect of this mercy, the
bringing of humanity from darkness into light.
The light that shines from within through worshiping Allah alone and being Muslim. The light of the three Heavenly Messages – Judaism, Christianity, and Islam – calling to the one true religion. One light sent by the One God.