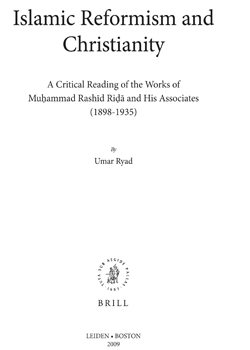 No previous full-scale study has been undertaken so far to study the polemical writings of the Muslim reformist Muḥammad Rashīd Riḍā (1865-1935) and his associates in his well-known journal al-Manār (The Lighthouse). The book focuses on the dynamics of Muslim understanding of Christianity during the late 19th and the early 20th century in the light of al-Manār’s sources of knowledge, and its answers to the social, political and theological aspects of missionary movements in the Muslim World of Riḍā’s age. The basis of the analysis encompasses the voluminous publications by Riḍā and other Manārists in his journal. Besides, it makes use of newly-discovered materials, including Riḍā’s private papers, and some other remaining personal archives of some of his associates.