Islam and Atheism face to face 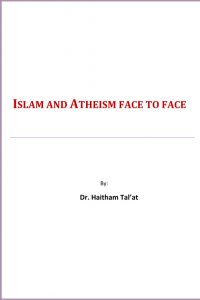 Islam and Atheism face to face

Questions and Answers
In the Name of Allah. All praise is due to Allah, and may Allah’s Praise, Peace and Blessings be upon the Messenger of Allah, his family, companions and his allies.
This booklet is entitled: ” Islam and Atheism face to face” It offers an explanation of the meaning of atheism, its problematic aspects and how it contradicts unquestionable facts of reason and disposition,
and presents some pieces of evidence that prove the existence of the Creator, may He be exalted.
As a matter of fact, we know Allah Almighty through reason. Allah says: Were they created by nothing, or were they the creators [of themselves]? [Surat at-Tur: 35]
Using reason there can only be three possibilities (without a possibility of a fourth)
First: People are created without a creator (Were they created by nothing), which is impossible, for how can there be a creation without a creator?
Second: That people created themselves (or were they the creators [of themselves]?), and this is impossible as well, for how can one create himself before he was created?

Thus, there only remains the third possibility, which the noble verse did not mention, given that it is self-evident, namely, there is a creator who created us.
So, we know about Allah through reason,
and through natural disposition as well.
We innately know that idols and nature are unable to create the universe or bring to life bacteria and humans into existence or adjust the functions of the human body in such a form, or efficiently bring into existence such a creation starting from atom to galaxy.
They do not have control over their own affairs, neither can they regulate the hormones inside their body in such grear measure. They are unable to supply every living cell with a genetic code, which contains sets of millions of pieces of information. They cannot bring anything into existence, even themselves.