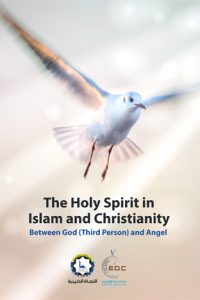 Between God (Third Person) and Angel

It is the Holy Spirit. It is such a being who perplexed the followers of the Abrahamic religions for there is no consensus over the Holy Spirit’s status: if he is God or an angel or what?

Each Abrahamic religion has its own conception of this unusual being.

It is impossible to reconcile those conceptions given the considerable disparity among them.

Let’s consider the nature of this being in the light of the Qur’an on the one hand and the Bible including the Old Testament and the New Testament on the other hand.

The Holy Spirit in Islam

In Islam, the Holy Spirit is Gabriel, who is an angel of God. He is sometimes mentioned by the name “Gabriel”, whereas he is sometimes referred to, inter alia, as “Holy Spirit”.

He is exclusively named “Holy Spirit” to the exclusion of the other angels given his central role in the revelation of the Holy Scriptures and his support of the prophets of God and godly people.

Scholars sought to account for “Spirit” as an exclusive name of Gabriel unlike the other angels. Al-Jayyani remarked: “he was called ‘Spirit’ for selves are livened by him just as they are livened by spirits.”

Ar-Razi followed by Ibn `Adil noted: “he was called ‘Spirit’ for he was created from God’s Spirit.” It is said that he is given this name “for he represents salvation for all creation in terms of judgment. So he is like a spirit which gives life.” It is also said “for he is wholly a spirit unlike the human beings who have both bodies and spirits.” He is called “trustworthy” for he was entrusted with the revelations conveyed to prophets and others.