The Genesis of the Salafi Ashari Divide 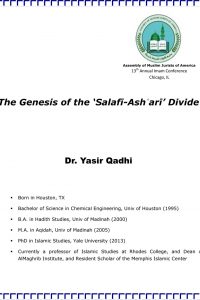 The Genesis of the Salafi Ashari Divide

Early Islamic history saw the rise of a number of theological controversies, the most significant of which were: the criterion of selecting leaders and their function in society; the issue of defining faith (īmān); the effects of sin on salvation; and predestination versus free-will. Such debates amongst the nascent Muslim community led to the formation of groups that would later be identified as Sunnism, Shīʿism, Qadarism, and Khārijism.(1) For the first hundred years or so after the death of the Prophet, the issue of the nature of God and the question of how to understand scriptural references to the Divine Attributes does not seem to have surfaced. When that controversy finally did erupt in the middle of the second Islamic/eighth Christian century, it would take center stage for the next five hundred years, eclipsing and absorbing the earlier controversies, and resulting in the formation of at least half a dozen schools of thought. In fact, this issue would become so overarching that it would even render Sunnism asunder, and lead to the largest intra-Sunnī division, as manifested in two of its most prominent medieval champions:
Muḥammad b. Muḥammad al-Ghazālī (d. 1111 CE)(2), and Taqī al-Dīn Ibn Taymiyya (d. 1324 CE).