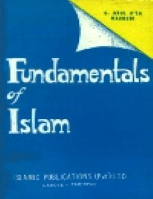 Fundamentals of Islam is a revised English edition of the critically acclaimed Khutubah (originally written in Urdu). It consists of Friday congregational addresses, in them he expounds familiar themes; like Iman, Islam, the Prayer, Fasting, Alms-giving, Pilgrimage and Jihad.

Mawdudi passion for Islam and the Ummah is clearly present in these addresses, which are beautiful and eloquent spoken, powerfully and passionately reasoned and yet simple and lucid in style; he imparts to these very teachings, the life and revolutionary ardour which they had when originally proclaimed and instituted. This he does mainly by restoring the vital links between them in which, unfortunately, have long since been lost in Muslims minds and lives – links like, life and Iman, Iman and actions, Jihad and Iman and history. In his discourse, Iman is placed at the centre of life, so it can regain its power to change man and his world.

These addresses, which were originally delivered more than four decades ago from 1939-1939, is still relevant and vital. It has been meeting the real and great spiritual and cultural guidance needed by Muslims; and despite the passage of time, retains its original freshness. This edition restores Mawdudi’s message with his original charm and vigor to a new generation of Muslims.