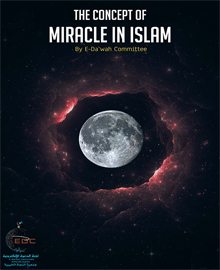 The Prophets and Messengers of Allah (peace be upon them all) are distinguished from common individuals by many qualities and characteristics. Almighty Allah educated them in a way that prepares them for their mission and enables them invite people to Allah. The prophets and messengers (peace be upon them) were supported with supernatural favors by Allah, namely Mu`jiah (i.e. miracle) that means an action or deed which is beyond the ability and power of human beings, and differs from the law of nature in this universe. In the Islamic terminology, Mu`jizah (miracle) means an act which people are unable to do, but Allah performs it at the hands of a prophet to prove his prophethood.

In all such conditions, the action which proves the truthfulness of the claim of prophethood is called Mu`ajizah. The prophets (peace be upon them) were given the miracles as proofs of their prophethood before their peoples. Miracles are such performances that cannot be done without supernatural help from Allah. By the Support of Allah, the miracle occurs to the Prophet without any practice or machinery. Prophet Jesus (peace be upon him) would cure the blind and leprous without any medicine, and that was his miracle.