Are You Looking For Happiness? 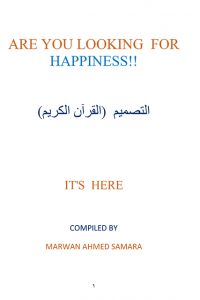 Are You Looking For Happiness?

It’s my pleasure to introduce this booklet to those who are sincere, honest, serious and open-minded in seeking the truth.
The Islamic view of humanity is filled with mercy and compassion towards all people, and it cannot be otherwise, because Islam is the final true religion that was prescribed by Allah for all humanity .

It teaches us to deal with all humanity with respect, justice, humbleness and kindness.

No doubt that happiness is our primary goal in this life. My aim in this book is to show you the source of happiness which is the Quran and it is up to you whether to accept it or reject it.

Kindly, before you read
1- Don’t Judge Islam by Actions of Muslims. (Blame the Individual, Not the Faith).

2- Don’t believe media because it presents a negative image about Islam .
The Western public often is misinformed about Muslims through the images on television, magazines, radios, and comic strips in newspapers, which promote strong messages among their audiences. Western reporters often say that Muslims are terrorists.
Many people follow their religions blindly without proof under the justification that they “have faith.” Having faith in ideologies, belief systems, or religions that are not based upon clear proof is a source of falsehood .