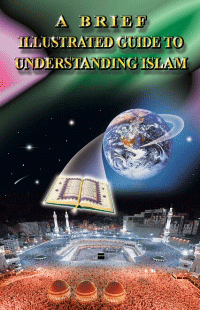 This book is a brief guide to understanding Islam. It consists of three chapters. The first chapter, “Some Evidence for the Truth of Islam,” answers some important questions which some people ask: Is the Qur’an truly the literal word of God, revealed by Him? Is Muhammad 1 truly a prophet sent by God? Is Islam truly a religion from God?

In this chapter, six kinds of evidence are mentioned: 1) The Scientific Miracles in the Holy Qur’an: This section discusses (with illustrations) some recently discovered scientific facts mentioned in the Holy Qur’an, which was revealed fourteen centuries ago.
2) The Great Challenge to Produce One Chapter Like the Chapters of the Holy Qur’an: In the Qur’an, God challenged all human beings to produce a single chapter like the chapters of the
Qur’an. Ever since the Qur’an was revealed, fourteen centuries ago, until this day, no one has been able to meet this challenge, even though the smallest chapter in the Qur’an (Chapter 108) is only ten words.

6) The Simple Life of Muhammad : This clearly indicates that Muhammad  was not a false prophet who claimed prophethood to attain material gains, greatness, or power.