10+ Hadiths on the Virtues of Sha`ban 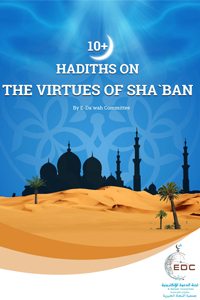 The E-Da`wah Committee in Kuwait is pleased to present this short publication which contains a collection of 10+ authentic Prophetic hadiths on the excellence of the month of Sha`ban and the importance of increasing good deeds such as fasting and remembrance of Allah following the footsteps of the Prophet (peace be upon him).

1- Usamah ibn Zaid (may Allah be pleased with him) narrated: “I said: ‘O
Messenger of Allah, I do not see you fasting during any month as much as
you do in Sha`ban.’ He said: ‘That is a month to which people do not pay
much attention, between Rajab and Ramadan. It is a month in which the
deeds are taken up to the Lord of the worlds, and I like that my deeds be
taken up when I am fasting.”‘ (An-Nasa’i)
2- `A’ishah (may Allah be pleased with her) narrated, “The month which the
Messenger of Allah most liked to fast was Sha`ban; indeed he used to join it
to Ramadan.” (Abu Dawud)

The Excellence of th Night of Sha`ban

One thought on “10+ Hadiths on the Virtues of Sha`ban”