Maqasid al-Shariah as Philosophy of Islamic Law A Systems Approach 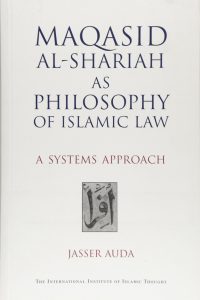 In this pathbreaking study, Jasser Auda presents a systems approach to the philosophy and juridical theory of Islamic law based on its purposes, intents, and higher objectives (common good, and tolerance in today’s context, Auda presents the very philosophy of Islamic law. He also introduces a novel method for analysis and critique, one that utilizes relevant features from systems theory, such as, wholeness, multidimensionality, openness, and especially, purposefulness of systems. ​

This book will benefit all those interested in the relationship between Islam and a wide variety of subjects, such as philosophy of law, morality, human rights, interfaith commonality, civil society, integration, development, feminism, modernism, postmodernism, systems theory, and culture.

There is lack of consideration and functionality of the overall purposes and underlying principles of the Islamic law as a whole. Further, exaggerated claims of rational certainty (or else, irrationality ) and consensus of the infallible (or else, historicity of the scripts ) add to lack of spirituality, intolerance, violent ideologies, suppressed freedoms, and authoritarianism.

democratic society. However, throughout my travels in various countries, I see little evidence for these values, on the ground, in Muslim
societies and communities everywhere. So, the big question that I have is: Where is the ‘Islamic law’? How could it play a role in this crisis?
This book attempts to provide an answer to the second question, which, I believe, will eventually bring about an answer for the first question. In other words, when the ‘Islamic law’ proves to have the capacity of making a real change in average-Muslims’ lives, they will embrace it and it will eventually make a difference.